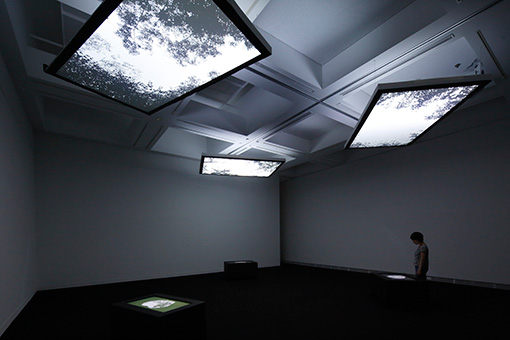 Youki Hirakawa creates videos, photos, and installations combining the two, which deal with the unique flow of time inherent to certain places or objects and impossible to measure with a clock. In black and white videos of phenomena such as burning candles or frozen leaves, shot from a fixed perspective, he captures static and rigid scenes that resemble pure crystallizations of time’s traces. Much of his recent work is based on investigative fieldwork on the locale where the work will be exhibited. Installations employing materials or subject matter obtained at specific sites stir concrete memories of places or objects, and feature a narrative character that brings the viewer face to face with the continuum of time intrinsic to these places, objects, or the viewer him or herself.

Since 2011 he has been based in Germany, where he has prolifically produced and exhibited work. Recent solo exhibitions include “Until You Fall Into a Deep Sleep” (Minokamo City Museum, Gifu, 2013), and “Silence of Nature / Nature of Silence” (Akademie Schloss Solitude, Stuttgart, 2013), and group exhibitions include the Aichi Triennale 2013, and “Stranger” at the National Taiwan Museum of Fine Arts, Taichung, 2013.

Hirakawa presents a new video installation at the Sapporo Art Museum, for which he surveyed and photographed tree stumps in Makomanai Park in Sapporo last year. Focusing on the trees that were once there and the holes in the sky left by their absence, the installation creates a “vanished forest” in the exhibition space by presenting multiple traces of this absence. Drawing attention to the contrast between untouched primeval forests and parks, man-made “nature” created in the course of urbanization, the work highlights the interrelation of city and nature and the history of Sapporo’s development.