In 1923, long before writing his famous quote, “Snow-crystals are letters sent from heaven,” Physicist Ukichiro Nakaya met Torahiko Terada at Tokyo University. Dr. Terada would become his lifetime mentor, and Nakaya began his scientific career under his tutelage with an investigation of electrostatic discharges. After studying abroad in London from 1928 to 1930, Nakaya accepted a faculty position at Hokkaido University.

On the northern island of Hokkaido, Nakaya became entranced by the beauty of snow crystals and started a research project on snow. He used a rugged hut on Mt. Tokachi as his laboratory and took more than 3,000 photomicrographs of natural snow crystals. He organized the photographs to develop a comprehensive classification scheme for snow crystals. In 1936, he succeeded in creating the world’s first artificial snow crystals, and used the experiments to establish the link between the crystal forms and conditions of crystal formation. He also devoted himself to addressing and solving problems specific to cold regions, such as frost heaving and icing, in particular aircraft de-icing.

In 1952, Nakaya was invited by the research lab SIPRE (Snow, Ice and Permafrost Research Establishment) located near Chicago), to take part in a research program studying single crystals of ice. He visited Greenland for the first time in 1957 as a member of an expedition for the International Geophysical Year, and returned there to conduct research every summer for three years. While in Greenland he worked on ice cores drilled from the ice cap, made up of layers of frozen snow that accumulated over hundreds of thousands of years. Ice cores drilled from the glacial ice are now used extensively to study global climate change. Nakaya is also reknown as a writer, for popular books of essays including Fuyu no hana (Flowers of Winter) and Yuki (Snow Crystals). He was also a pioneer in producing scientific films for the public.

SIAF2014 selects for display Nakaya’s photographs of electrostatic discharge, as well as photos of natural and artificial snow crystals from his vast collection of research material. The focus is on artistic appreciation. Nakaya always remained humble before nature. While he sought to shed light on its secrets, he always held as a primary goal to help his fellow members of humanity. As we live our lives in this increasingly technocratic society, we have much to learn from such a humanist scientific outlook as Nakaya displayed throughout his life. 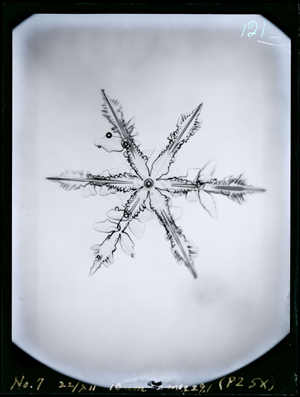