Tetsumi Kudo was born in Osaka and spent his early years in Aomori and Okayama before attending Tokyo University of the Arts. He began exhibiting work while still a student, and in the late 1950s became one of the most prominent exponents of “anti-art,” making a splash with his work shown at the annual Yomiuri Independent exhibition and elsewhere. Kudo moved to Paris in 1962 and spent over 20 years there before returning to Japan in the mid-1980s. In recent years his work, which delivers pointed cultural critiques and frequently views the world through the lens of science, has been shown in retrospectives in France and the United States, and has increasingly been the subject of critical reappraisal, along with a wider renaissance of interest in postwar Japanese art. From 2013 to 2014 “Your Portrait: A Tetsumi Kudo Retrospective,” the largest comprehensive showcase of his career in 20 years, traveled to the National Museum of Art, Osaka; the National Museum of Modern Art, Tokyo; and the Aomori Museum of Art.

During his Paris years, in addition to Happenings and other provocative body-related art, Kudo created a large body of work, particularly through the early 1970s, which dealt with primal biological conflicts and taboo themes related to the balance of scientific progress and human survival. He focused on subjects such as environmental pollution, nuclear power, and sexuality, and established a strong reputation in Europe. Critiquing the anthropocentrism of modern European civilization, seemingly prophesying the issues that our society faces today, and executed in a unique style at times described as grotesque, Kudo’s work has only gained impact with the passage of time.

At SIAF2014 sculptures from 1968 through the 1970s, a period when Kudo’s work was laced with barbed criticisms of rampant modernization, are exhibited in the Hokkaido Museum of Modern Art (Gallery A). 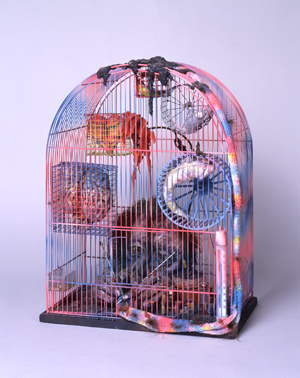 Portrait of Artist in the Crisis 1976
Collection of the National Museum of Art, Osaka
©ADAGP, Paris & JASPAR, Tokyo, 2014