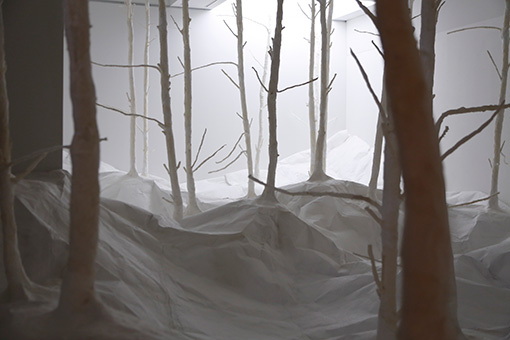 After graduating from Musashino Art University in Japan, Takashi Kuribayashi relocated to Germany and completed the master’s program at Kunst Akademie Düsseldorf. Kuribayashi’s work focuses on the multifarious “boundaries” that separate human civilization from the natural world. He creates large-scale installations replicating aquatic or inland environments using natural materials like plants, earth, and water, which envelop the viewer or provide a bird’s-eye view, delivering an experience of both sides of the human/natural boundary. The penguins and seals that frequently appear in his work are at home both in the water and on land, and thus embody the theme of the boundary while acting as comical guides to Kuribayashi’s created worlds.

In addition to solo shows at the National Museum of Singapore (2007) and Beyond Museum Seoul (2011), Kuribayashi has taken part in numerous international exhibitions including the 1st Singapore Biennale (2006). He has also participated in many group exhibitions in Japan including “Sensing Nature” at Mori Art Museum, Tokyo in 2010. His Sumpf Land (Wetland) is permanently installed at Towada Art Center Aomori, where his solo exhibition “Water >|< Wasser” has held in 2012. For this festival, Kuribayashi reconfigures his Wald aus Wald (Forest from Forest) (2010- ), a white forest made of Japanese washi paper that is itself made from trees, to suit an exhibition space in the Sapporo Art Museum. Featuring crevices reminiscent of the partitioned spaces in quintessentially Japanese interiors, and a multi-layered structure, this installation enables the viewer to see the paper forest from an unexpected perspective. While evoking the vast expanses of Hokkaido, the work provides an opportunity to stop and reexamine the position of humans on the boundary between the natural and the artificial.