Artist Takafumi Fukasawa has organized many interactive art projects, including Tokuino Bank (2011-), where the currency consisted of things that people were good at doing, rather than money.
As part of the 10th Anniversary Program at Yamaguchi Center for Arts and Media (YCAM) in 2013, Fukasawa again administered Tokuino Bank, dramatically transforming modes of communication in a local shopping arcade.
Here, he implements it in Sapporo, opening Tokuino Bank, Sapporo Branch: Since 1869 and presenting documentation that evokes things that people must have been“ good at” when Japanese from Honshu first settled the region. 〈 Former Sapporo Court of Appeals (Shiryokan)〉 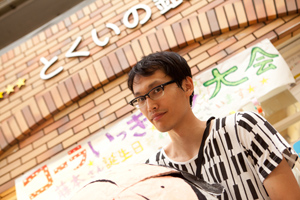