Taiji Matsue regards “landscape” as “surface of the earth,” and has taken landscape photographs in many different locations around the world in a consistent style, interpreting the activity as “collecting samples of the earth’s surface” in the manner of a geologist. He has gained recognition for this distinctive, detached approach, which is often referred to as “collecting places.” Since 1991, Matsue has taken finely detailed photographs of the earth’s surface in direct, even natural light. In the series Gazetteer, he photographed natural landscapes in places such as the Alps and gave each photo a name based on its location, whereas in the series CC he shot urban landscapes and assigned each one a “city code.” His earlier work (1991- ) was in black and white, but in recent years he has worked with color photography (2005- ) and videos (2010- ) that he refers to as “moving photographs,” while continuing with his ongoing series.

For SIAF2014, Matsue exhibits new aerial photos of Sapporo he took last summer, autumn, and winter in Sapporo Art Museum, depicting the interaction between city and nature. He also shows videos in which the camera scans smoothly across the surface of these aerial photos. The works act as a bridge joining the two museums, where the focus is on “city” and “nature” respectively, while providing viewers with a new vantage point from which to observe Sapporo’s urban landscape. 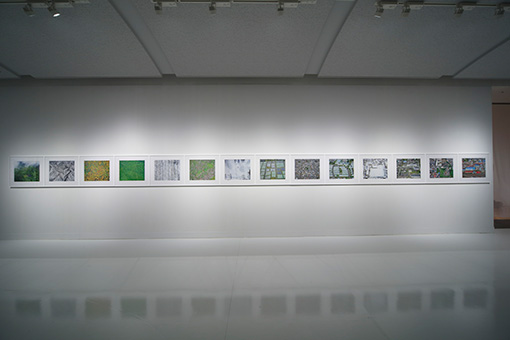