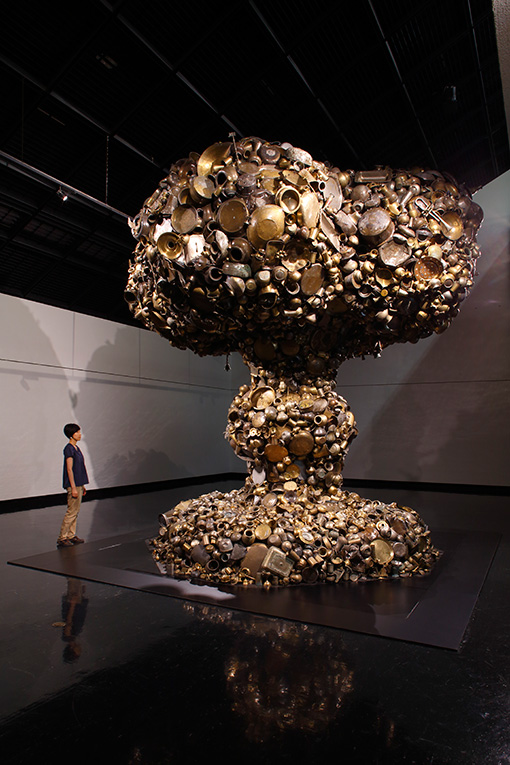 One of India’s leading contemporary artists, Gupta has participated in numerous international exhibitions including the 51st Venice Biennale (2005), “Altermodern” (The Tate Triennial, London, 2009), and the 6th Fukuoka Asian Art Triennale (2009), and has held solo exhibitions at the National Gallery of Modern Art (New Delhi, 2014) and elsewhere around the world.

Gupta studied painting at an Indian art college. In the mid-1990s he emerged as a transformer of ubiquitous objects and customs from everyday Indian life into works of art, producing installations employing ritual items from the village where he grew up and everyday objects, and staging performances and videos using cow dung to address the themes of purity and uncleanness. Since 2000 he has made sculptures on a larger scale, dealing with the rapid modernization of Indian society and universal themes such as urbanization and consumerism, with motifs such as typical Indian dishes and lunch boxes, motorbikes, and taxis.

Shown at SIAF2014 is one of his major works, Line of Control (1). The title seeks to convert a blasé media stereotype into a poetic metaphor. Here, a phrase invariably used to describe contested borders between disputed territories from Bosnia to Kashmir is shorn of its limited and limiting geo-political rhetoric to be relocated in that invisible-yet-concrete time-space that lies torn between want and aspiration; between realisation and faith; between dreams and reality; between night and nightmare.
Gupta’s giant sculpture, Line of Control (I), could thus be seen to symbolise that open, high-pressured vent through which a mushroom cloud of ‘auspicious’ kitchen utensils; wittily proposing, as it were, a cloud-burst of Peace and Prosperity to a world blindly rushing to the brink of self-annihilation.

Subodh Gupta navigates his chariot of transgressions in a cathartic pageant- that of a world constantly being lost/ destroyed and yet emerging anew, reconfigured, reconstructed from its own debris.