Aiming to make art that openly engages with the world, Soichiro Mihara creates systems employing a wide range of media technologies, and continually questions the “here and now.” Since 2011 he has been working on a “blanks project” which explores beyond the boundaries of the systems that drive modern society. Currently, Mihara is in a residency at SymbioticA, a biological arts laboratory in Perth, Australia, where he is studying biotechnology. He is also participating, as an artist, in the Techtile (technology-based tactile design) project dedicated to research into haptics (a field that applies tactile sensation to the human-computer interface). Mihara’s recent solo exhibitions include “The World Filled With Blanks” (Kunstraum Kreuzberg / Bethanien, Berlin, Germany, 2013 and Kuan-Du Museum of Fine Arts, Taipei, Taiwan, 2013), and group exhibitions include “Sound Art – Sound as a Medium of Art” (ZKM, Karlsruhe, Germany, 2012-2013), “Open Space 2012” (NTT InterCommunication Center, Tokyo, 2012), “Simple Interaction―Sound Art from Japan” (Museum of Contemporary Art, Roskilde, Denmark, 2011), and “ISEARUHR2010” (Dortmunder Kunstverein, Dortmund, Germany, 2010).

In this exhibition, Mihara presents a work ‘ bell’ (2013) on the second floor of the former Takeo Arishima Residence, which was moved to the grounds of Sapporo Art Park. The work consists of a glass dome with an embedded microchip that detects radiation, and when it detects natural or human-made radiation that human beings cannot normally perceive, a wind chime under the dome rings. In Japan, wind chimes were traditionally hung to drive away evil spirits. With its delicate sound, ‘ bell’ gives perceptible form to the uncertainties of nature and science and the imperceptible forces around us. 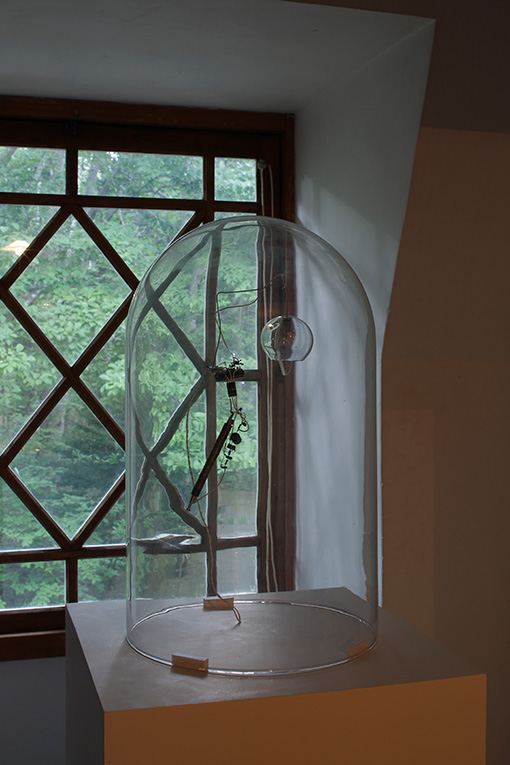