Among Japan’s most acclaimed photographers, Hatakeyama studied in the Plastic Arts and Mixed Media program at the University of Tsukuba under the photographer Kiyoji Otsuji, who was a member of the avant-garde group Jikken Kobo (Experimental Workshop). Since then Hatakeyama has presented series of photos depicting subjects like blasts at mines and excavation sites, urban architecture, building demolitions, and underground waterways. Portraying the urban and industrial on a heroic scale, yet with delicate refinement, Hatakeyama asks penetrating questions about conflicts between the artificial and natural worlds and the fundamental nature of the photographic medium. His work fascinates the viewer with its thorough objectification of its subjects and powerful sense of the artist’s intent.

Hatakeyama won the 22nd Kimura Ihei Award in 1997 and the Minister of Education Award for Fine Arts in 2012. In addition to many solo and group exhibitions in Japan and overseas, he participated in the 49th Venice Biennale (2001) and the 13th Venice Biennale International Architecture Exhibition (2012). His latest solo show, “Natural Stories” (Tokyo Metropolitan Museum of Photography, 2011) was a retrospective of his works from the earliest through the most recent, including scenes of his hometown, Rikuzentakata, which was devastated by the Great East Japan Earthquake of 2011. At SIAF 2014, Hatakeyama presents works from two series, Zeche Westfahlen I/II Ahlen (2003) depicting a former coal mine site in Germany, and Terrils (2009) showing city and nature in a French former mining community at the Hokkaido Museum of Modern Art (Gallery A). The once-flourishing industrial sites atrophying or evolving as a result of social transformation, slowly returning to nature over the course of many years, evoke the history of modernization here in Hokkaido, with its many abandoned coal mines, and of Japan as a whole. 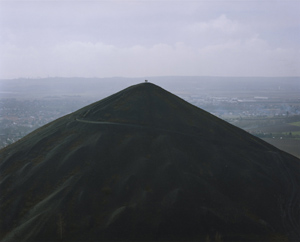