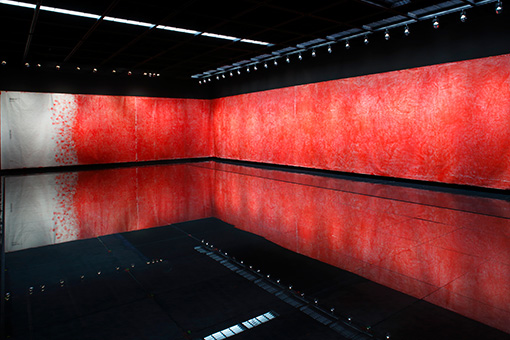 In 1977, Masao Okabe began producing frottage rubbings to transfer invisible memories embedded in cities and traces of the historical record to visible form. In 1979 he stayed in Ivry-sur-Seine, Paris, and produced 169 frottage works entitled Membrane of a City. He began a project to create art out of the remnants of the Hiroshima atomic bombing in the late 1980s, and exhibited the results at the Venice Biennale in 2007. Okabe has gained international recognition for his direct, physical approach, and continues to create work in cities such as Hiroshima and Fukushima. In 1988, he collaborated with residents of Noosa, Australia on a 150-meter frottage of a city street, and since then has actively participated in group collaborations and workshops, creating and exhibiting work in various cities in Japan and overseas. Major exhibitions and projects include “Art for the Spirit: The Gaze of Eternity” (Hokkaido Museum of Modern Art, 2001), “Masao Okabe Synchronicity Project” (Hiroshima City Museum of Contemporary Art, 2005), the 52nd Venice Biennale Japanese Pavilion: “Is There a Future for Our Past?” (2007), “Hiroshima in Tasmania” (Museum of Old and New Art, Tasmania, 2011), and “Remembering and Documenting Minamisoma” (Minamisoma, 2013).

At SIAF2014, Okabe presents Yubari Matrix 1998-2014 at the Hokkaido Museum of Modern Art (Gallery A). The floor, covered with drawings, is then covered with reinforced glass so that visitors walk over the works to view them. By doing so, they vicariously take part in the act of creation, and physically experience the structure of the now-defunct coal mines of Hokkaido, gaining vivid insights into the evolution of the energy resources that underpin modern life and the history of urbanization.