In addition to visual art, German artist Carsten Nicolai produces electronic music under the name Alva Noto. In 1999 he founded the record label “raster-noton”, and has released numerous solo experimental music recordings while also collaborating with Ryuichi Sakamoto, with Ryoji Ikeda as “cyclo”, and with many other musicians, to international acclaim.
In addition to two comprehensive exhibitions of his work in Germany in 2005, Nicolai has taken part in many international exhibitions including Documenta X (1997) and the 49th and 50th Venice Biennale (1999, 2001). His large-scale video installation unidisplay traveled to Montreal, Milan, and Frankfurt in 2012 and 2013. In Japan, he held a solo exhibition at YCAM (Yamaguchi Center for Arts and Media) in 2010, as well as taking part in the Echigo-Tsumari Art Triennial in 2003 and 2012 and the 4th Yokohama Triennale in 2011. He received the Grand Prize (Art Division) at the 17th Japan Media Arts Festival in 2014.

Aiming to synthesize artistic formats and approaches, Nicolai applies scientific systems, mathematical patterns, and semiotics to the generation of art, including grids, codes, errors, and random or autonomously generated structures. The work presented here, unicolor, is the latest iteration of a series that has developed from univers to uniscope (2010), and then to unidisplay.
The enormous video installation, approximately 16 meters wide projected on the wall of the gallery, is reflected with mirrors on both sides to create an expanded space as infinite as the universe itself. While calling to mind the color research of art-historical forebears like Josef Albers and Johannes Itten, it delivers fascinating insights into our perception of color. Another work, snow noise, employing artificial snowflakes and inspired by the snow crystal research of Ukichiro Nakaya, will be shown at the Hokkaido Museum of Modern Art. Visitors can observe the development of artificial snow crystals produced in test tubes. 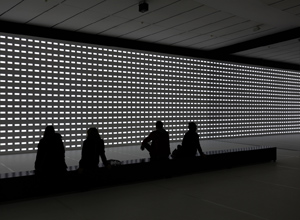