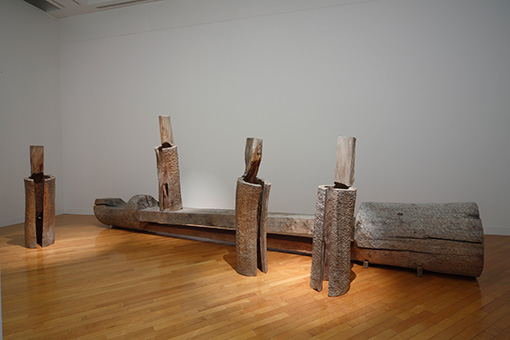 Bikky Sunazawa was born in Asahikawa, Hokkaido and was involved in folk sculpture before moving to Kamakura in 1953. He taught himself painting, and exhibited at the Modern Art Association and the Yomiuri Independent exhibition. Sunazawa developed close ties with intellectuals such as Tatsuhiko Shibusawa, and produced abstract and Surrealist paintings. Eventually he deepened his engagement with sculpture, and in 1958 received the New Artist Award in the sculpture category from the Modern Art Association. The following year he returned to Asahikawa, and after a period working in a Sapporo studio from 1967 onward, he moved to the village of Otoineppu in 1978 and continued producing art prolifically.

Sunazawa’s work remained largely focused on the woodcarving he began in his youth. His wood sculptures, featuring biomorphic forms and brimming with vitality, range from delicate small works to imposing monuments. Late in life he produced dynamic works on the theme of the wind. The largest of all is Four Winds, installed in the open-air museum at Sapporo Art Park, made from four Ezo spruce trees over five meters in height, on which nature has “applied the chisels of wind and snow.” Sunazawa connects the wind to the number four, as in the poem that describes the wind as “a beast with four heads and four feet.” His Listening to the Wind, also carved from Ezo spruce, features a row of four pillars that evoke tree spirits.

At SIAF2014, in the Sapporo Art Museum, two sculptures welcome viewers: Tongue of God, carved from a single Japanese oak tree trunk, and his late masterpiece Listening to the Wind. Sunazawa’s sculpture, created through the tactile act of direct woodcarving so as to engage with and draw out the essence of the material, conveys a reverence for nature that resembles prayer.