Anselm Kiefer is among the best-known contemporary European artists. He studied law at university before changing course to become an artist, studying under artists including Joseph Beuys. In 1969, Kiefer stirred up controversy with Besetzungen (Occupations), a series of photographs of himself imitating a Nazi salute in various locations around Europe. Since 1980 he has produced a great volume of paintings, sculptures, installations and mixed media works incorporating a wide range of materials including lead, sand, sunflowers, straw, photograph, and books. His reputation grew with a series of solo exhibitions in 1984 in Düsseldorf, Paris, and Israel. Kiefer was awarded the Praemium Imperiale World Culture Prize in Memory of His Imperial Highness Prince Takamatsu in the painting category in 1999, and from 2005 to 2007 a retrospective of his work was held at the San Francisco Museum of Modern Art and traveled around North America.

While unflinchingly addressing the dark side of modern German history, Kiefer invites reflection on universal modern-historical themes that know no borders, and elicits a powerful emotional response. At the same time, many of his works are given titles drawn from mythology, the Old Testament of the Bible, and the Jewish mystical tradition of the Kabbalah, encouraging multi-layered interpretations coupled with messages about the realities of history. At SIAF2014, his works, which are shown in Sapporo for the first time, include Melancholia, a sculpture depicting a fighter plane made primarily of lead, which in the artist’s work has significance as a “primordial material,” Siegfried’s Difficult Way to Brunhilde as well as Haus auf Bergwerk mit Ersheinen der Sefiroth am Himmel, multimedia works with various overtones of history and memory. The heroic scale of Kiefer’s work overwhelms the viewer and inspires reexamination of the very essence of what it is to be human. 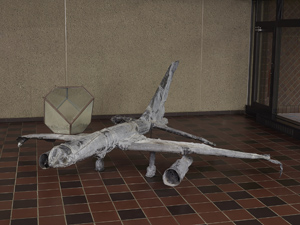